SK hynix Inc. (or ‘the Company’, www.skhynix.com) today announced financial results for its fiscal year 2021 ended on December 31, 2021. The consolidated revenue of fiscal year 2021 was 42.998 trillion won, while the operating profit amounted to 12.410 trillion won and the net income 9.616 trillion won. Operating margin for the year was 29% and net margin was 22%.

SK hynix achieved record high annual revenue since its foundation. This surpasses the revenue in *2018 when the semiconductor market was in its biggest boom.

Despite uncertain market conditions such as supply chain disruptions, demand for contactless IT technology has increased. Based on its technology and quality competitiveness, SK hynix managed to supply its products proactively, achieving record-breaking annual sales.

In addition, with the competitiveness of 128-layer NAND Flash products the NAND Flash business, which succeeded in turning into a surplus in the third quarter of last year, also recorded a surplus on an annual basis by recording sales growth rate that far exceeded the market average level.

SK hynix forecasts supply chain issues will gradually improve beginning in the second half of this year, and market demand for memory products will increase.

In line with this, SK hynix decided to continue its strategy of focusing on profitability while containing market volatility by managing its DRAM inventory flexibly.

For NAND Flash, SK hynix will continue to pursue growth in scale. With the launch of its US subsidiary Solidigm after the close of the first phase of Intel NAND and SSD business acquisition last year, SK hynix expects its NAND Flash sales will double compared to last year.

SK hynix decided to raise its dividend per share to 1,540 won, up more than 30% from 1,170 won a year earlier. Additionally, SK hynix will apply new dividend policy from this year to 2024, with the fixed dividend per share raised from 1,000 won to 1,200 won. SK hynix will maintain its policy of distributing an additional 5% of **Free Cash Flow (FCF). The Company also stated that it will utilize approximately 50% of FCFs created over the next three years as shareholder return funds and consider repurchasing treasury stocks depending on the situation.

Meanwhile, SK hynix will initiate a series of new recruitment of college graduates and experienced employees in the first quarter of this year. Compared to previous years, the Company has decided to expand the recruitment plan to prepare for new growth engines in the future, including the establishment of the Yongin Semiconductor Cluster, the launch of the US subsidiary Solidigm, and the full-scale operation of the Icheon M16 fab. The fields of new recruitment include process, device, design, test, packaging, SoC, software, data science, product planning & strategy, and the others, and the recruitment schedule will be posted next month on the website.

﻿﻿﻿﻿﻿﻿﻿﻿﻿﻿﻿﻿﻿ This video was produced by SK’s Global Development Group. It is a part of a series of videos produced that highlight the talent and personalities of SK employees across its operating companies in the Read more… 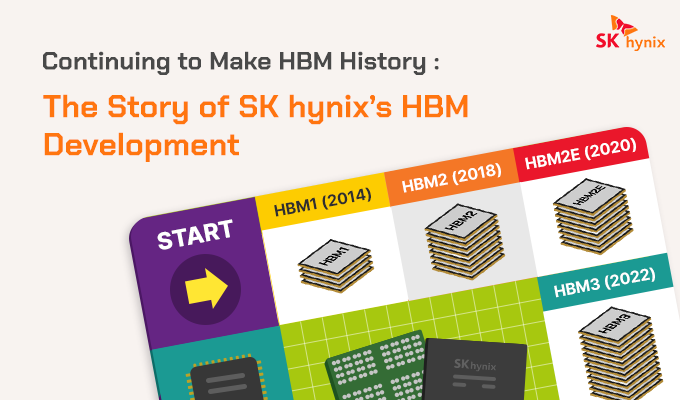 When SK hynix became the first in the industry to develop HBM3, its latest HBM (High Bandwidth Memory) product, the company not only took its place in the record books but also firmly maintained its Read more…